Academy youngsters Reach for the top!

Reach Table Tennis Academy have enjoyed some eye-catching successes during their first year of competition. 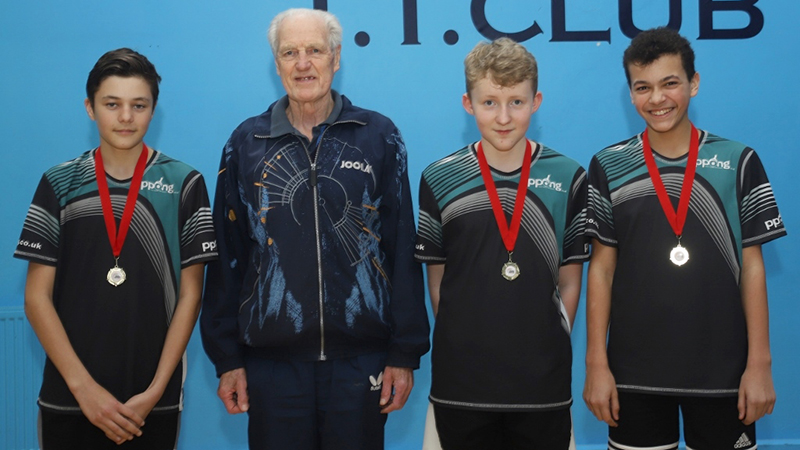 Reach Table Tennis Academy have enjoyed some eye-catching successes during their first year of competition.

The Academy grew out of a partnership between The Reach Free School in Rickmansworth and the newly formed Chorleywood Table Tennis Club, after club coach Roger Close was invited to run some table tennis sessions at the school.

Head Richard Booth had set up a table tennis club at the school, which proved popular and resulted in the school becoming Hertfordshire Under-13 Boys champions.

The club was subsequently rebranded The Reach Table Tennis Academy as half the junior players came from the school and, as Roger said: “The Reach Free School pupils were setting the standard to aspire to and their mindset stood out.”

The club is open to everyone in the community, but all the juniors are proud to wear Reach Table Tennis Academy shirts, regardless of whether or not they attend the school, because of the reputation of its players.

Reach entered two teams in the Ellenborough TTC-based National Junior League and four teams in the corresponding National Cadet League, competing against some of the biggest clubs in the area, including the hosts, BATTS (Harlow) and Mossford TTC (Redbridge).

But it was in the NCL that the most remarkable performance came. Last Sunday (25th March) the first team (Sahraoui, Kazakov and Charlie Caslake) started the day level on points with Ellenborough TTC and, in the first match of the day, came back from 0-2 down against the joint leaders to win 5-4.

Next up were BATTS and Caslake set the tone by fighting back from 5-10 down in the fifth game of the first match, giving the team confidence, and they ran out 9-0 winners against a strong BATTS team.

With Ellenborough TTC beating Mossford TTC 9-0 a nail-biting round of matches lay ahead. When Ellenborough TTC fielded their big guns against BATTS, it looked as if Reach Table Tennis Academy couldn’t afford to lose a single match. However, the momentum of the competition shifted dramatically when, in the opening match against Ellenborough, Alexander Howard (BATTS) fought back from 1-2 down to beat Victor Ostapenko, and then Harry Argent (BATTS) beat Camron Malcom (13-11 in the fifth).

Meanwhile, after Caslake’s convincing win over Samir Latif, Kazakova fought back from 1-2 down to beat Vineeth Kamma, which left the Reach Table Tennis Academy 2-0 up against Mossford. In the end, Ellenborough lost 6-3 against BATTS and Reach beat Mossford 9-0 and were deservedly crowned champions.

Speaking after the victory, coach Close said: “What the boys achieved on Sunday was truly outstanding. The cost of sports facilities in our area means that they only have access to 65 minutes’ proper coaching a week and they were competing against clubs whose juniors have affordable access to five or six hours coaching per week some in purpose-built facilities.

“I’m not sure whether any group of players have achieved this in their inaugural season. The statistics show that their results improved more than 20% during the season.

“What makes me most proud is their sportsmanship. They never engage in any behaviour that might adversely affect an opponent.”

Parent Helen Brown said: “My two sons have had tremendous fun playing with The Reach Table Tennis Academy. The team spirit is fantastic and the support from Roger and Zoli first rate.

“It has been a great experience for them to be able to play competitive table tennis locally and a great learning opportunity on so many different levels – body, brain, social skills, perseverance. I can’t recommend the club highly enough.”

The club is keen to find local business sponsors to help cover the costs of hiring practice facilities and equipment. Any contribution, large or small will be much appreciated. Contact Roger Close at [email protected] or phone 07469 727335.