On what would have been the first day of the European Championships, we spoke to John Hilton about becoming European Men’s Singles champion 40 years ago. 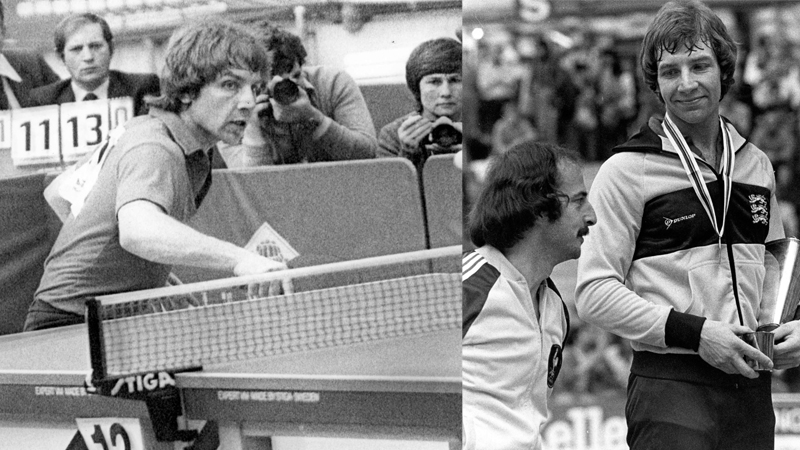 Were it not for the pandemic, England’s leading players would today be starting their European Championship campaign – 40 years after John Hilton became England’s last individual continental champion.

Hilton won the Men’s Singles title in Berne in 1980, a triumph which remains the only time an Englishman has topped the podium in that event.

It was a result which few predicted. Indeed, it was described by George Yates in Table Tennis News as: “Possibly the sporting coup of all times, and most certainly without parallel in the annals of the European Table Tennis Championships. Here was a man, figuring at No 3 behind Desmond Douglas and Paul Day in the English team, hacking down the giants of Europe whilst still engaged, back home, as an insurance agent, on a door to door collection and sales basis, tramping the pavements of the environs of Manchester.”

That England trio of Douglas, Day and Hilton had taken bronze in the team event preceding the individuals, and John’s record of 11 wins from 16 matches showed he was in decent, but not scintillating, form. He had also helped England win team silver two years previously and was therefore respected at that elite level – but even so, few put him among the favourites in the singles.

And yet, seven victories later he was on top of the podium. Bruno Parietti (FRA) and Bjarne Grimstrup (DEN) were beaten in three straight and John then recovered from losing the first set against both Wilfried Lieck of West Germany and Hungary’s Tibor Kreisz to post 3-1 victories.

His semi-final opponent Jacques Secretin of France was beaten in four, while it was three straight (21-17, 22-20, 21-14) in the final against Josef Dvoracek (CZE), who had beaten Douglas in the quarter-finals.

While most were surprised by John’s triumph, the man himself remembers sensing a chance once he had seen the draw and realised he stood to face players he had previously enjoyed a good record against.

He said: “Once I got to the quarter-finals, I should have lost to Gergely, but I’d beaten him a few months before in the European League and I knew I could. I pinched it off him – it was close – and I knew I could then beat Secretin and Dvoracek.

“I thought ‘I’m just destined’. That was my thought process. I thought, God’s given me the chance to play players I had a chance against and had done well against. But I still had to go and do it and I was brave enough to see it through.

“On the rostrum afterwards with Secretin, Dvoracek and Bengtsson (Stellan, the other bronze medallist), I was a bit overawed to be on the same platform as them – they were top players in the world.”

Much has been made of the different rubbers on John’s bat, his twiddling during rallies making it a struggle for his opponents to see what was coming across the net.

As George Yates put it in Table Tennis News, reporting on the victory over Secretin: “The French ace seemed nonplussed as he attempted to read the varying returns from the different rubbers on John’s twisting racket.”

This advantage was removed when, from 1986, the ITTF stipulated that different coloured rubbers had to be used, though John – perhaps surprisingly – says he was always in favour of that move.

He also points out that his tactical and defensive nous was an important factor in his triumph.

He said: “I didn’t have any coaching as a kid and I didn’t start playing until I was 13. I had to do it the hard way by understanding the game. I analysed my opponents and got an in-depth understanding of their tactics. I could read situations well and didn’t panic.

“Twiddling over the table at speed, with two different surfaces and techniques, is difficult and I used it to the highest of my ability.

“Before the Europeans, there were mutterings about ‘funny bat players’ – and a lot of the Chinese team were using long pimples at the time. We had a vote on it at our training camp in Lilleshall before the Europeans and I voted that we should have two different colours. I agreed with the change.

“It took a few years to happen, but two years after the change I was still in the top five in England. My style when I won the title was probably 75% close to the table and 25% defensive. After the rule change, I had to go back to defending more but it kept me in that top five. That was an achievement in itself.”

While winning the title helped to catapult John to a career high of No 5 in the world rankings, there was an oft-quoted saying that he was No 1 in Europe but only No 4 back at his club, the YMCA in Manchester, where players were more used to his style. It was something John was happy to go along with.

“I was interviewed by the Manchester Evening News at the YMCA in Manchester,” he said, “and one of the lads shouted out ‘he may be No 1 in Europe, but he’s No 4 here!’ The reporter asked if it was true and I said ‘of course!’

“To be fair, I struggled against Nigel Eckersley because we used to practise together day and night, and there was Dave Constance too – he beat me in a semi-final play-off to be in the team for the Worlds in Birmingham in 1977.

“After I came back from Berne, I was interviewed several times and they all said they supposed it was my best win ever – but I never thought it was.

“At the Worlds in Pyongyang the previous year I was drawn against Wang Huiyuan of China in the first round. He hadn’t played in the team event, so I thought he was the No 6 or 7 Chinese and I beat him 2-0.

“Months later, the Chinese coach was interviewed and said it was the biggest shock the Chinese team had had in the previous 12 months. It turned out Wang was their national champion and was expected to win the Worlds. I beat him, but then lost in the next round to a lad from Sweden called (Jan-Ove) Waldner, who was about 16 at the time.”

A knee replacement means John is more likely to be found on the golf course rather than on the table these days, but he keeps an eye on the sport and the fortunes of the England team. He says he would love to see one of the current crop of England players match his feat and become European champion.

“I’d be delighted – it would be marvellous,” said John. “I’m shocked it hasn’t happened and it’s about time it was done.”